In the previous part, we discussed the geometric kitchen of satellite broadcasting, and now we know where it is possible and where it is impossible to receive a signal, and what kind of antenna is needed. But this is only part of the success.
The converter must be installed on the antenna. In other words it's a LNB (low noise block), also it's called a head. It is on the converter that the beams are focused by the mirror and its task is to amplify the received signal and transmit it to the cable. And then we come across the first peculiarity.
The point is that two frequency ranges are used for satellite television broadcasting:

Waves of this frequency propagate poorly in the cable and to transmit the signal to tens of meters from the antenna, the frequency is reduced to the L-band (0.95-2.1 GHz, intermediate frequency). An attentive reader will notice that its range is almost half that of Ku-band. Therefore, the latter is conditionally divided into subbands:

In some sources, you can also find the third sub-band from 12.5 to 12.75 GHz called Telecom by the name of French satellites operating at these frequencies, and not because only the satellite Internet data is transmitted at these frequencies. In any case, nothing prevents broadcasting of TV channels in the low or telecom bands, and this is often found in practice.
Accordingly, the converter must be specified which of the frequency bands must be received and put into the cable. This is done by sending a 22kHz tone to the LNB. If the tone arrives, the head accepts high subband, if not, the low one. If you need to receive the entire range, then you need a converter for 2 outputs (actually 2 converters in one casing). In fact, it's better to go straight to 4, but more on that later. In household sets, LNBs with one output are usually supplied, since they are designed to display one channel and the receiver knows when to tone and when not. Or at all the converter is made for reception of only one subband and presence or absence of tone on it in any way does not influence. Sets Tricolor and NTV + in retail are completed with just such. There are also wideband converters that can accept all Ku-frequencies, giving out to the cable the ranges of 230-2100 or 950-3000, but they are rare. And the receiving equipment must be appropriate.

As you remember from the first article, the frequency resource is limited and when broadcasting from a satellite, spatial separation is used. However, this is not enough and, in addition to spatial, the polarization separation is also applied. In fact, it makes possible to use one frequency in each beam twice. In satellite television, there are 2 types of polarization:

The operating mode of the converter depends on the supplied voltage 13 (R, V) or 18 (L, H) volts.
In the cable there is no polarization at all, so you can not put two transponders in one cable, which differ only in polarization, not!

So what about the four outputs? It is simple:

So, we wired 4 cables from the antenna to the headend station. And there is 4 more inputs on it. For example, there can be 8 of them on the NetUP Streamer.

Behind each input of the headend is a receiver, which can simultaneously tune in only one frequency (transponder). In the case of an analog signal, there’s only one channel located on one frequency. In digital broadcasting - there are a lot of them, can be 20 or even more. The professional headend allows to receive all the channels of the selected transponder from one input. 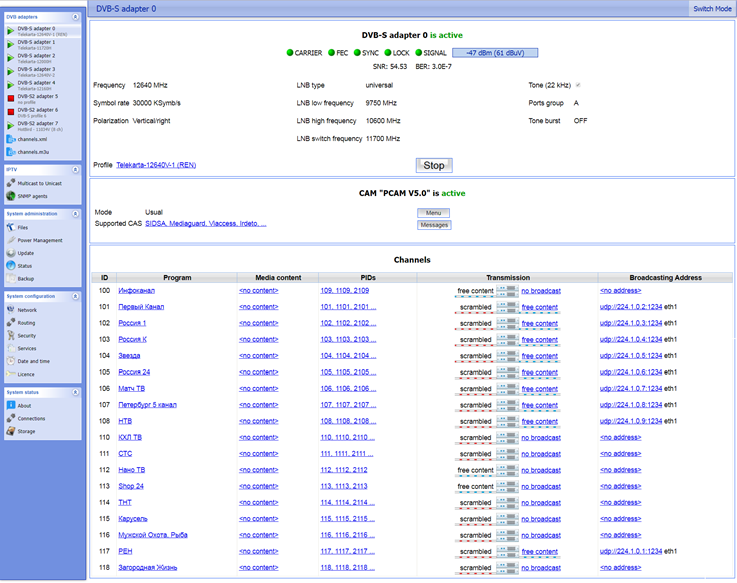 To distribute the cable to multiple inputs of the NetUP Streamer, you can use simple splitters. They are on 1 input and 2, 4, 6, 8 outputs. But in this case all outputs will have access to transponders with only one polarization. The scheme is working, slitters are cheap, but if you need to reconfigure the headeand, you will most likely have to physically reconnect the wires. A more flexible scheme can be implemented by using multiswitches. 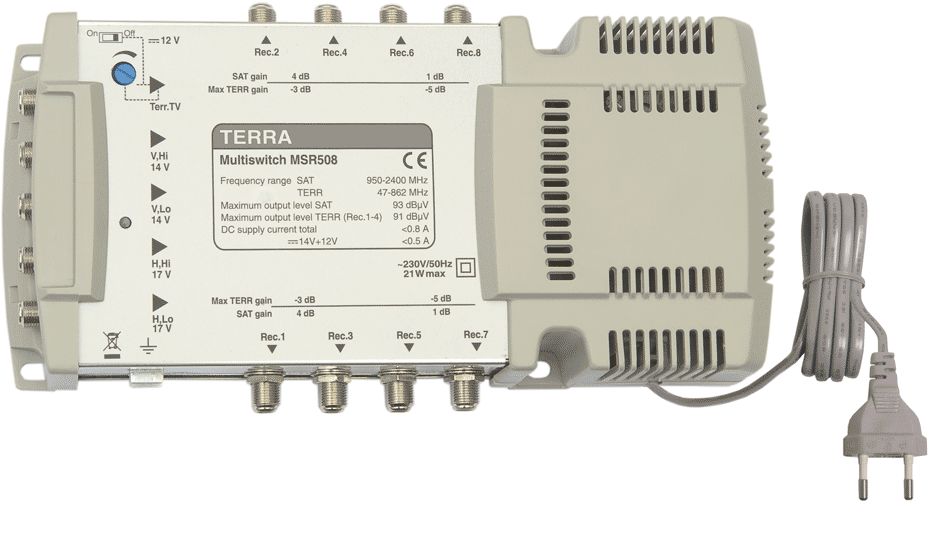 Typically, multiswitch has 5 inputs (4 for satellite signal from converter and 1 for terrestrial antenna) and 4 to 32 outputs. The internal mechanism, depending on the voltage and the presence of a tone from the headend, allows to connect any of the outputs to any of the inputs. That is, at any time at the headend we can set up any of the adapters for the desired transponder, and multiswitch itself will figure out to which of the cables going to the converter, it needs to connect. Everything is great and convenient, but, damn it, there's a nuance. Most multiswitches do not let the 22kHz tone from the headend to the converter and do not generate their own. Therefore, it is necessary to install tone injectors on the cables for which the high subbands should come. 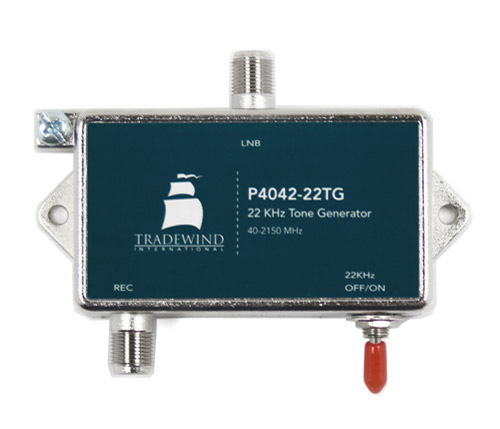 This simple and cheap device has eaten a lot of nerves ...
Of the other accessories, we recommend to set up lightning protection. Well, here without comment, as they say.