Despite the fact that satellite television exists for more than a decade, and the number of subscribers around the world is measured by hundreds of millions, in our work we often encounter a lack of understanding of the broadcasting technology from customers and integrators. Sometimes design errors come up at the stage of the start-up and adjustment works and FAIL occurs, failure of timing terms, unforeseen expenses and other troubles. We hope this set of articles will help you to avoid such situations in future. In these articles there will be no theoretical calculations – only the information is useful in practice.

The idea of using satellites for television broadcasting is that a repeater in space can cover a much larger area with a signal than a repeater located closer to the Earth surface. But in order for not to use sophisticated equipment for positioning/tracking a repeater(transponder), a satellite should always be located in the same position relative to the surface of the Earth. That is, to have constant coordinates (latitude, longitude and altitude).
The constancy of the altitude tells us that the orbit of rotation of the satellite must be circular, the constancy of the longitude means that the satellite's circulation period must coincide with rotation period of the Earth and have the same direction, and from the constancy of the latitude it follows that the satellite must be located above the equator (this is easy to imagine - the satellite must rotate around the center of the Earth). Such an orbit is called geostationary. You can scratch your head, remember the school physics course and calculate the parameters of such an orbit or just open Wikipedia and find that the radius of the orbit is 42,164 km (the altitude above the surface is 35,786 km) and the speed is 3.07 km/s. 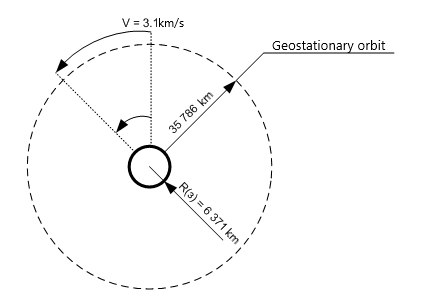 Since for the observer on Earth the satellite is stationary, its location is called a standing point. The latitude for all such satellites is always 0 °, therefore only one parameter, longitude, is usually used to indicate the satellite's coordinate. If you stand facing the equator (to the south in the northern hemisphere), then the following picture opens in the front of us

Let's come back to the altitude. The satellite is distant from the planet for almost of 3 diameters, which allows him to "see" the entire side of the Earth facing him with a viewing angle of only about 18 degrees. However, there are nuances:

There are many kinds of satellite dishes: omnidirectional, traveling-wave, phased arrays, but for receiving satellite TV, mirror ones are usually used – let’s stop on them. These antennas are called so because they contain a mirror (reflector) in their design, the metal surface of which reflects the satellite signal and focuses it on the converter (it's LNB, it's also the "head").
Mirror antennas are divided into axisymmetric and offset. The first ones have a symmetrical mirror, and the converter is installed at the focal point in front of it (a direct focus antenna). Two-mirror schemes can also be used when the counter-mirror is installed in the focus of the main mirror, and the converter is already in its focus. The main problem of such antennas is that the irradiator and its mount obscure a part of the antenna's main mirror, therefore such a scheme is used, as a rule, on large diameter antennas (starting from 1.5 meters).
Offset antennas are cut from a parabolic mirror, the irradiator is displaced and does not obscure the antenna, which makes it possible to produce small-size antennas. In addition, offset antennas are installed more "vertically", and sometimes even with a negative slope, for example, for receiving a signal from the 85E in Moscow, and are less prone to the influence of weather conditions – the accumulation of dust, snow or icing. However, large-size offset mirrors are more difficult to manufacture than direct focus ones. 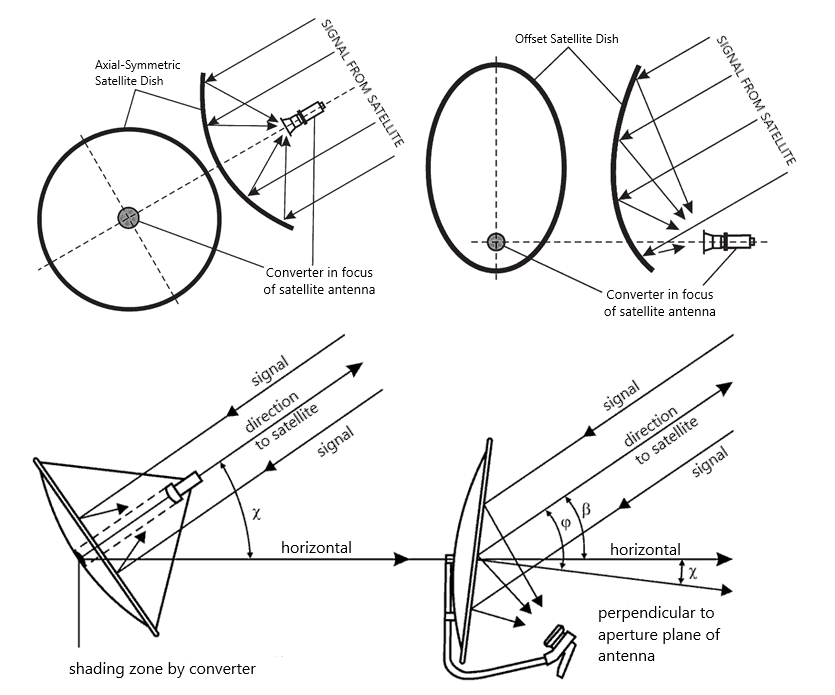 We can not fail to mention the multifeed – a special mount that allows to install several converters on one mirror so that each of them will be in the focus of it’s satellite. But alas – to receive a signal it will turn out only from close orbital positions, and also it is necessary to search for the compromise between different directions and to sacrifice signal quality.

if you decide to build an antenna post, then: